Breaking Barriers by Creating an Equal Playing Field for All

Over the past few years, Bay Area residents have been subjected to a constant barrage of statistics underscoring the income disparity problem in San Francisco. So many in fact, it may be difficult for many not to become indifferent to the seemingly unending income inequality figures.
But here’s one recent survey that stood out. 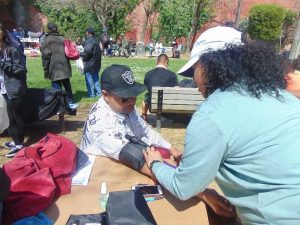 It’s because of troubling statistics like these why SCSF’s Breaking Barriers events (the most recent one occurred on June 16th) are so important to the underserved community, many whom may not have their GED, have gaps in their employment or have other barriers that are keeping them from being employed.

“Many of the people who find themselves without jobs really do want to work
but don’t know where to turn to find the help they need. Our Breaking Barriers event gives them the answers they need toward finding a job,” said Success Center SF Community Outreach Manager, Adrian Owens.

For many living in SF, it seems like only some inhabitants are enjoying the bullish Bay Area economy. An economy primarily fueled by the tech, a high-income industry woefully lacking in diversity. For the rest of us, particularly those residing in the Western Addition/Fillmore, Bayview /Hunters Point, and other areas of the city, residents are more likely to be low income — unemployed or underemployed (working part-time, or have lower wage jobs).

Bay Area Income Disparity in Action
One glaring example of this can be found in the city’s median household incomes, found in a recent San Francisco Board of Supervisors report.
African Americans living in the Western Addition had an annual income of $12,156 while whites living in the same area made $75,271 – a whopping difference in income of over 600% based on race.
Another example can be seen in Bayview / Hunters Points. African American households have median household earnings of $34,547, Latinos/Hispanics have a median income of $40,709, while white households in the same area have a median income of $103,428. 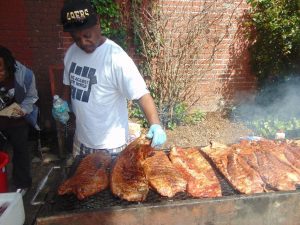 What Breaking Barriers Does

The Breaking Barriers events, (which started in September 2016) are designed to strip away red tape often encountered by people needing to overcome various obstacles preventing them from attaining the education and employment they need to lead happy, sustainable lives and have a shot erasing economic inequalities like the ones recounted above.

These, and other common barrier removal needs, are imperative to stem the substantially lower employment rates of African Americans, Latinos/Hispanics, Asian Americans, and other people of color in San Francisco. 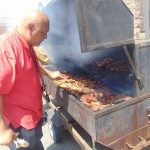 Some Examples of How Breaking Barriers Helps the Community

Many in the city find it difficult to find — or keep a job – if, for example, they have to take off time to care for their children because they can’t find affordable child care. Others may find the job market closed to them because of mistakes they made in their past, such as DUIs, theft, and other justice system issues that may continue to show up during background checks.

In a city where any studio apartment renting for under $1500 is considered a steal and where the median home purchase price just hit a record $1.5 million (San Francisco Business Times) Success Center San Francisco’s Executive Director Liz Jackson-Simpson summed up the impact of Breaking Barriers this way. “We have assisted hundreds of Western Addition residents by matching them up with the right resources that can help them. We are humbled to have helped people turn their lives around by aiding in lifting barriers that get in the way of them finding meaningful employment.”

Western Addition Career Center
If you attend one of our Breaking Barriers events, you’ll also learn more about SCSF’s Western Addition Career Center (1449 Webster Street). The Career Center helps clients by providing users with the Center’s computers, fax machine and other services to assist in their job search free of charge. The Center’s hours are Monday – Thursday: 9:00am – 6:00pm and Friday: 9:00am-12pm. New client orientations are every Monday- Thursday at 10:00am.

For more information about our next Breaking Barriers event, please visit https://successcenters.orgwww.successcentersf.org or call us at 415-549-7000.