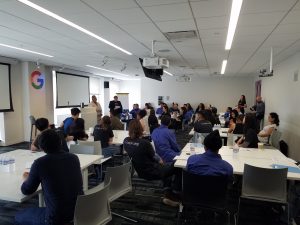 Everyone hit the ground running. Not long after a beautiful introduction to SCSF from CEO Liz Jackson-Simpson, and a  speedy ice-breaker, the room (located on the seventh floor of Google’s SF office on Spear St.) was buzzing with mock interviewers in the form of Google employees and interviewees comprised of burgeoning young professionals from all over the city.

The young people ranged from 16-25 years old. The youngest in the room however was a 13 year-old who found out about the event through her connection at SCSF and made her way to the Google office despite an arduous two-hour Uber pool to get there.

The interviews were first. The students were presented with common interview questions. Some were nervous, others seemed confident. Feedback was given to all.

Next was the resume review. Google employees peered over laptops and pieces of paper, offering critiques, edits, and answering all questions. For some students this was their first resume review, for others needed only a few small refinements.

Throughout the morning networking was the name of the game. Old colleagues laughed, new relationships were created, business cards were exchanged, and all of this before lunch.

The momentum continued as members of SFCC and SCSF sat and ate with the Google staff while overlooking a view of the bay and the Bay Bridge. After which the day simmered to a close as everyone said their goodbyes and headed to the lobby.

Collaborations like these, between the city’s booming tech industry and its tireless nonprofits, are the perfect mix of innovation meeting equitable elevation. For many, the event was their first time stepping into a tech office. Being allowed in the room gave the students the understanding that the tech world, albeit daunting, was still accessible. Only time can tell, but the relationships that were fostered on Monday morning, were the catalyst future engineers, coders, and young entrepreneurs.