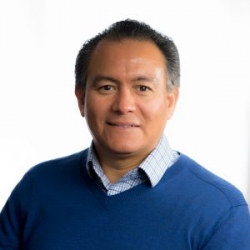 Adrian Trujillo joined the Success Centers in 2017, bringing with him more than 25 years of result-filled financial and administrative management experience. He provides leadership and strategic direction for all financial and operational functions, and directly oversees finance, accounting and human resources.

Adrian received his B.S degree from St. Mary’s College in 1988. He worked in two CPA firms and he became a CPA in 2000. Prior to joining Success Centers, Adrian worked for the Private Industry Council of San Francisco as the Chief Financial Officer for ten years before moving to the Asian Art Museum (a nonprofit and City Department) as the Controller for eight years. Adrian next venture was controller at the San Francisco Art Institute for over two years before he landed at Success Centers.

Adrian also served the as a Member of the Employment Advisory Committee for the Human Rights Commission of San Francisco (March 2007 – February 2009) and graduated from the Leadership San Francisco, Class of 1998.