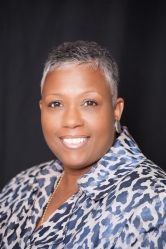 Liz Jackson-Simpson has served as Chief Executive Officer of Success Centers since 2010. During her tenure, she has exponentially enhanced its capacity, increasing the budget from $450,000 to more than $9 million, growing the staff, bringing in new supporters, and acquiring a community location in the Western Addition.

While attending San Francisco State University, Liz began working with the Private Industry Council (now known as the Office of Economic and Workforce Development), becoming an expert in workforce development and education programs, and eventually co-authoring the highly praised Youth Opportunity grant from the U.S. Department of Labor. This grant secured $28 million for youth employment programs in San Francisco.

After retiring from the Probation Department, Liz was named the first-ever Executive Director of Program Development for the YMCA of San Francisco—a position created specifically to leverage her enormous expertise. After serving a five-year stint, Liz embraced the challenge of becoming the first Chief Executive Officer of Success Centers.

Liz has been a lifelong artist, but her love of art has taken second place to her love of community. All in all, she possesses nearly 40 years of workforce development and juvenile justice experience.